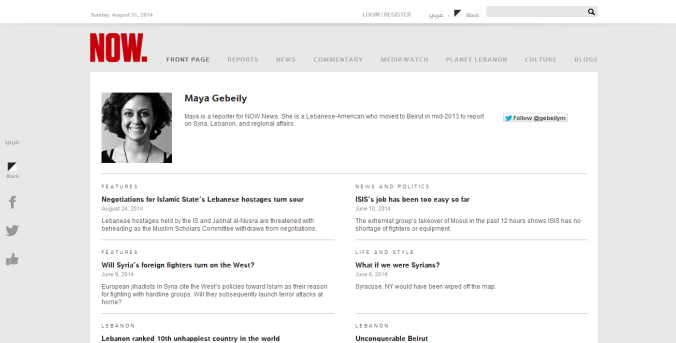 I had the pleasure of spending my first year in journalism at NOW News, a dual-language website covering Lebanese and regional politics, security, and culture. While there, I mostly covered Lebanese and Syrian security and social affairs.

The photo above is a link to the archives. The pieces I’ve linked to below are the three I’d say I’m most proud of working on during my time there.

Will Syria’s foreign fighters turn on the West? | June 9, 2014
A deeper look at whether ISIS’s foreign  fighters are being pressured to return home and attack the West

Shattered | January 10, 2014
Bullet holes in the walls and army barracks in the basement: how Tripoli’s fighting has affected schools and childhoods

When they took me | November 8, 2013
In their words, three Syrian women describe their experiences being held by the Assad regime